A detection method for a measurement of a microscopic object is required in order to detect specified objects contained in a channel of a chip. IMT provide Thermal Lens Microscope developed by KAST Kitamori Project jointly with Kitamori laboratory of the University of Tokyo for a detection tool of the microchip chemistry. A principle of the Thermal Lens Microscope is shown as follows.

If there is a material absorbs both an excitation laser and a probe laser through an objective lens, the light energy except the energy absorbed by the sample is all released to the solvent as thermal energy, and the phenomenon produces the increase in temperature.
According to the spatial distribution of temperature, a high gradient of the temperature distribution is formed around the optic axis of the laser by the intensity distribution and the thermal diffusion of the laser. In the case of fluid such as water, lower refractive index at the center of the optic axis and higher refractive index at the banlieue of the optic axis are formed because the refractive index is lowered by the temperature rise.
The refractive index distribution is equivalent to the concave lens and it is so called thermal lens. Sensitivity of the thermal lens is proportional to the calorific value generated; that is to say it is proportional to the amount and the concentration of a sample, therefore, the quantity of a sample can be determined by measuring the sensitivity of the thermal lens. For an actual measurement, excitation laser is modulated, and intensity change of the probe laser is simultaneously detected. 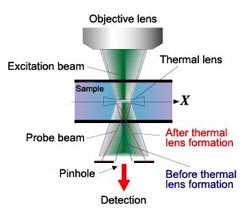 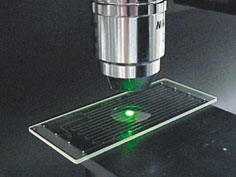 • Versatility based on the absorbance
• High spatial resolution by narrowing down the focus of the laser
• High sensitivity of quantitative detection in single molecule level
Please make use of Thermal lens microscope as ultrasensitive detector.